I’m currently searching for, and developing, a theory of rhythm which is at the same time one of reading. Elizabeth Deeds Ermarth, in Sequel to History: Postmodernism and the Crisis of representational time is useful here as she conceives of reading ‘postmodern’ fiction as being a co-creative improvisation. Is this what we are invited to do in, or with, Anthony Macris’ novel Capital, volume one? To co-compose as we move with the generative mise en abyme’s machinic and organic oscillations and pulsations? Is the sound of, the rhythms of Capital, volume one like the sound that Robert Fink describes as the ‘media sublime’? What does it feel like ('feel' here to include structured feeling in Raymond Williams' sense of emerging cultural forms as 'structures of feeling') to read rhythmically?

If grunge literature attempts to use dissonance (Three dollars resolves its dissonance into consonance) alongside its temporalities of abjection, drug-use states, and thereby has one foot in the universe of tonality-representation (to use the language of Attali, Adorno, Ermarth et al: the key point here is that there are multiple ways out of scale and tonality – out of harmony, representation, exchange, consent and consensus), then Macris’s novel is drawing on a different, more French heritage of thought and practice to write outside of tonality and representation: to write so that the reader is moved – so that the reader must dance in order to read. And yet content, rather than just form, is central to understanding Macris’ novel for the 'bouncing ball', the floor lights that flash the next dance-step position, are not movements shaped by the cosmopolitan tourist’s new purchase or discovery, or by the movement toward redemption or reconciliation or creation – the movement here is constellated within the journeys of a milieu of discarded commodities, of forms that have expired, of the drive to satisfy the fetish of the commodity. Alongside the body of the reader are the bodies of the text’s things: the lucozade bottle, the pregnant mouse.

To draw back into another novel under consideration in the thesis, we find in Amanda Lohrey’s The Reading Group a key passage that sets this train of thought in motion. Disillusioned with late 1970s orthodox Labourist politics, the literary agent Renata attends a reading group of friends and former Left activists which is seeking to reignite Left political revolutionary feeling. During the initial meeting Renata wonders at a homology between reading politically and dancing as political leadership. What is touched on just at the edge of thought (a line from David Malouf's Remembering Babylon) for Renata is the sense that while reading is able to ingest codes and systems (the steps of politics) it is also something rhythmic, something felt in the same way that rhythm is felt in the body.


Sam [said] that politics was a form of dancing: you had to know the steps. And the steps changed all the time; so that just when you’d learnt one set the formation would change, or the formation would stay the same but the tempo would alter . . .
Renata had asked the obvious question: she didn’t see how reading could improve your dancing. Listening, maybe, but to what?
Well, said Sam, you had to know how to listen, you had to know how to interpret the code, and since all concepts came back to words, reading could help you to anticipate. And in any form of dancing, any structured form of dancing, he’d corrected himself, every step has a name.
So, you could teach yourself dancing from a book?
Sam didn’t see why not; after all, you could teach yourself yoga from a book.
Yes, said Renata, but yoga isn’t done to a beat, except that of your breathing. In music there was a rhythm that the body had to experience for itself.
True, but you didn’t have to hear it played; all you had to do was to learn how to read music.
Renata had given up at this point. There was something wrong with this argument of Sam’s, she knew, but she couldn’t pinpoint it, not towards the end of a meal with a head hazy from Andrew’s Beaujolais. (The Reading Group 29-30)


[T]here was something faintly ridiculous and Victorian about a reading group. Reading groups were for fanatics or Trotskyists, people who were fringe or impotent, or for middle-aged housewives who had nothing better to do with their time. Reading with other people was unsophisticated, uncool: reading was something you did alone. (33-4)

Thus we come to a hard core of one of the questions at the base of this thesis: what, if anything, gets [read] into novels? Is there something material, something spiritual, something historical, something bodily-rhythmic that manages to lodge itself in novels and becomes, for the better ones, the content and substance upon which the reader’s identifications and empathies are then made to loop back through the reflective prompts of formal (aesthetic) ethics and politics? 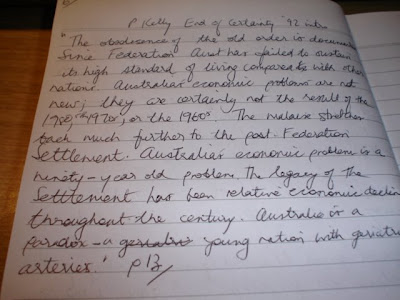 Do we read, also, with our body? Do we experience rhythms in, or even through, our bodies as we read? Ermarth:


The reader . . . has a harder time of it [Ermarth writing here about a Borges story]. The story forces reader attention into play between semantic systems, and that play is what constitutes rhythmic time. The echoes of those multiple systems shine through, pullulate, in the transparent moment, and force the reader to be aware that at any point multiple turnings are possible. Reader attention alternates between contradictory possibilities, and the rhythms of this attention cannot be reduced to statement. [68]

Macris’s novel does something similar; the two narrative threads force a switching between narrative orientations (narrator: third and first-persons, time-space, episode and mock-epic, discontinuous and continuous), between paradigms. In the London Underground [LU] thread the initial orientation is framed by the negative: by missing the train. This missed train is analogous to Ermarth’s depiction of postmodern temporality as rhythmic time: a time off the track[s]. Yet in this negativity of the LU thread the productive and generative force of the narrative is made. In other words the initial negativity is a precondition for the positivity that follows: albeit a positivity that is dirty, gritty, lacking in redemption or reconciliation, or even the satisfaction of successful (Spivak's continuist) commodity exchange. An incommensurability or discontinuity between the two narrative 'threads' that is not a contradiction to be resolved, or an ideologically open gap to be symptomatically filled by an (psycho) analytic meaning or truth. No. Instead the negativity of this incommensurable gap between the chapters sparks the generation-machine of the novel's secondary layer of formal movement: the rhizomic root weave of motiffs and themes, mise en abyme, multiplying and imploding across these gaps and ruptures.
Posted by Michael C at 9:13 PM