Ever fallen under the spell of a writer or a particular book?

John Irving, author of The World According to Garp among other novels, talked about a moment in writing when the the universe of a novel fell under one tone of voice. When a single tonal register enclosed the world of the novel: its characters, events, places. Is this what happens when we are drawn into a story or oeuvre - we surrender to something like a gravitational pull, and stop resisting the story and storytelling and begin to feel our way into the emotional contours of the tale?

Do we ever really begin to inhabit a story until sparks of identification and feeling make the jump from the page to our emotional and cognitive receptors? And once sparked, to put the question in its inverted form, what sorts of readings are those that rasp against the grain of the verbal wood or unrepress the traumas and loss that the text is a maze of dreamwork-like symptoms for? Do we need to first be spellbound before such literary-critical unbindings occur?

Australian novelist, poet, essayist David Malouf did exert a spell over me for a period in the mid 1990s. Malouf's fictional prose often tumbles and flows through a mesmerizing tone of voice, that combines romantic awe with tenderness and a sly sense of humour. Malouf is also a canny plotter and seems to have ingested much of Heidegger's early existentialism and Edward Said's postcolonialism, giving his prose sustained passages of reflection where the narrator works through a problem or event with the timing and feel of the calmer, epiphanic instances of romantic poetry.

Malouf's novels are often structured around an intense homosocial relationship and often involving an 'artist' who the narrator is close to yet ultimately distant from. These romantic artists are also postcolonial forerunners: their primary mode of being-in-the-world is forged out of a confrontation with the limits of colonial structures and discourses, and in such confrontation the creative imagination (what Cornelius Castoriadis calls the Radical Imagination) is enabled to break into newness or alterity. Frank Harland (Harland's Half Acre), Gemmy Fairlie (Remembering Babylon), the wild Child (An Imaginary Life) and Johnno are characters in Malouf's fictions that become post-colonial through their creative responses to encounters with the limits of colonial space and imperial presence. If, as Heidegger in Being and Time argues, authentic existence is a modification, rather than transcendence, of everyday being-with-others then the creative modifications of such colonial and nationalist social being in Malouf's fictions are postcolonial becomings that hover on the brink of transcendental idealism without ever becoming ungrounded.

Exiled from Rome to the rural village of Tomas the poet Ovid, the narrrator of Malouf's second novel An Imaginary Life, tells us early in the narrative that:

[T]he spirits have to be recognised to become real. They are not quite outside us, nor even entirely within, but flow back and forth between us and the objects we have made, the landscape we have shaped and move in. We have dreamed all these things in our deepest lives and they are ourselves. It is our self we are making out there, and when the landscape is complete we shall become the gods who are intended for it. [28] 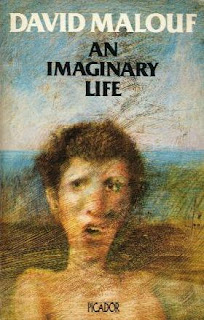 Yet later in the novel, after Ovid has worked through the mourning of his lost father and had the existential encounter with his own mortality (being-toward-death), such Romantic idealism enters a dialectic with a returned gaze of a Native child - the wild wolf-like Child of the village:

What I remember clearly now are his eyes, fixed on me across the open space between the trees, that stare is something I could not have imagined. I have seen nothing like it before, except from the eyes of my child, so many years ago . . . It exceeds my imagining, that sharp little face with its black stare, and I think how poorly my poetry . . . compares with the accidental reality of this creature who must exist not to impress but simply because he has somehow tumbled into being. [50 - emphasis added]

In Remembering Babylon [1993] a character's authentic existential experience is also dialectically entwined with the ethics of the Other - the Other for whom the self's recognition (and vice versa) establishes identity:

[H]er regard was upon him . . .trying to see right into him, to catch his spirit, aware, as the others were not, that he was not entirely what he allowed them to see . . .her gaze was so open and vulnerable that he felt no threat in it, and in himself only a stillness, a sense of tender ease at being exposed for a moment - not to her, but to himself . . . he felt in the concentration of her gaze that he hung there still. Something, in that moment, had been settled between them . . . he went back and back to it. [35-6] 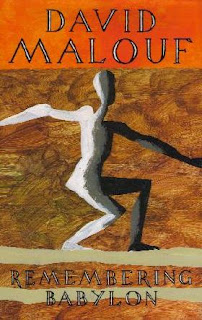 In the scene above the putatively indigenized Gemmy Fairlie (Malouf's portrayal of the white indigene as hybrid racial-cultural subject), gives presence to a totality of possibilities for postcolonial inhabitance through the reflection returned to Janet McIvor's open gaze:

'I have never seen anyone clearer in all my life. All that he was. All.' Something Gemmy had touched off in them [Janet and her brother Lachlan] was what they were still living, both, in their different ways . . .[and] in a stilled moment that had lasted for years, Gemmy as she saw him, once and for all, up there on the stripped and shiny rail, never to fall . . .drawn by the power, all unconscious in them, of their gaze, their need to draw him into their lives - love, again, love - overbalanced but not yet falling. [195-9]

I do still find both the expression and the ideas spellbinding: the possibilities of the imagination working with presence and Others to enable a deeper dwelling, and the simple, precise and elegant language, that tumbles clauses together in a conversational tone. The Free and Radical Imagination and the radical social imaginary are tempting dreams to believe in, as sources of postcoloniality, justice and liberation. But the social imaginary doesn't behave in the same way as the creative-productive imagination: the power of institutions, of discourses, of the production and distribution of commodities, of the turning of people into waste products, the power of capital to shape and form the social imaginaries that most people live within. 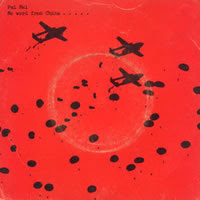 Reading Malouf's fiction as postcolonial Romantic existentialism finds its limits when you start looking to historicise the period from which he begins to produce prose: 1975 to the present. From someone of my generation 1975 is the year punk rock starts to emerge, and this musical-cultural form was short, sharp and rooted in negation and Warlholian aesthetics. So, while Malouf's seductive prose and ethical-aesthetic project retains its power to spell me, I feel like I'm being gravitationally pulled into a history that doesn't square with being shaken by experiencing Newcastle's post-punk band Pel Mel at the MacQuarie Uni Bar in 1983 and feeling as though that was where life was. And it wasn't until Andrew McGahan's Praise (1992) that something of what Pel Mel were doing - a shared structure of feeling - came into Australian fiction, for me at least, with the tone of voice of Praise's Gordon Buchanan:


I'd always maintained a certain distance from the staff at the Capital. I liked them, I drank with them, but I didn't get involved. There were only a few, Carla and Morris, and maybe Lisa, that I bothered with outside of work hours. Most of my friends came from other parts of my life. From school. University. Most of the sex came from there too, but there wasn't much sex and what there was hadn't been much good. I was young and nervous and not very enthusiastic. I didn't have the libido I felt I was supposed to have. And I didn't expect things to improve. I relied on masturbation.

[Pel Mel - No word from China You tube link]
Posted by Michael C at 9:10 PM No comments: