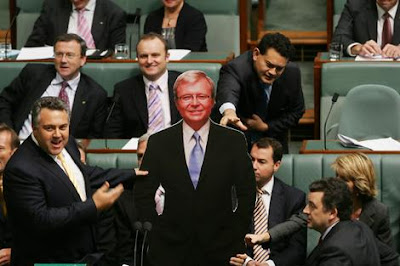 Australia's federal Parliament was extended from four to five days this week. The carboard cut-out being propped up here by the Liberal-National Coalition (LNC) opposition is of the newly elected Prime Minister Kevin Rudd, leader of the Australian Labor Party(ALP). The cut-out was part of a stunt intended to demonstrate that this fifth sitting-day was itself a gimmick because Rudd and nearly all government ministers weren't in attendance. A reverse camera shot would reveal a next to empty front bench: a bad image for a new government seeking to portray itself as hard-working, regardless of the real reasons for extending sitting days and the travesty that the LNC made of parliamentary procedures, especially after it had won control of both houses in its last term.

while Lindsay Tanner [Govt. Minister of Finance] may well be right that the behaviour on show yesterday resembled what you might expect from Young Libs after a few too many g&ts, there’s a serious problem for the government here. The lack of the ability to hold a division means that rulings by the Speaker or Deputy Speaker can’t be properly enforced, and it also incidentally disables the opportunity for tempers to cool during the lengthy process of actually holding a division. Whether or not the public blames the Libs for the risible scenes visible on the news last night, a smart Leader of the House should have a rethink.

However, the photo above really is too good an opportunity to be missed for some captioning :

We're keeping him until all his 70% popularity rubs off on us!

We bought this one on ebay - can we go back to being in charge now?